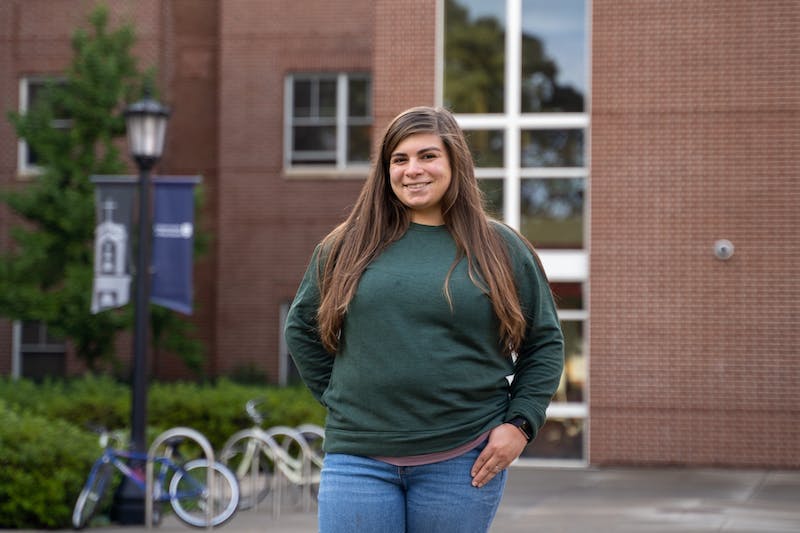 For most students, summer vacation is spent catching up on some much-needed rest or building a resume through internships, jobs, and classes. But for 23-year-old Amanda Hernandez Michalski, summers have been spent living with the Congregation of Saint-Joseph de Carondelet prepare for her life as a sister.

“My mother has always been my main inspiration for my faith,” Amanda said. “She always insisted that God will always be there for you.”

With a faith deeply rooted in her family life, she knew that in college she had to make her own choices. Choosing to live with the Sisters during her college years had a great impact on her faith and her life ambitions.

Long before graduating from UP in 2020, Hernandez Michalski had planned his graduate plans.

“I had planned to go to CSU Northridge, which is a university in Los Angeles, living with the sisters, and one time, you know, things were sorted out and I finished my application and then I would go to novitiate and then I would go through the whole process to become a sister, ”said Hernandez Michalski.

Instead, Hernandez Michalski’s plans have been disrupted by the pandemic. She was forced to return home and take online classes. But after a visit to UP at the end of 2020, Fr. Jim Gallagher brought up the idea of ​​returning Hernandez Michalski to UP for his graduate studies.

“This is where I know I will receive a quality education and be able to live the values ​​that are close to my heart,” said Hernandez Michalski.

Upon his return to UP, Hernandez Michalski was offered a pastoral resident position at Fields Hall. She would be the first layman to occupy this role in the history of the UP. She gladly accepted the offer.

Until now, the pastoral residents of all dormitories in the UP have been priests of the Holy Cross. But after struggling to find a priest to fill the position at Fields Hall, UP had to consider other options. As a previous student who served in campus ministry as a member of the Servant Leadership Team, Hernandez Michalski brings a level of relativity to students.

“With Hernandez Michalski, part of that strength she brings is having had the experience of being a woman living in the hallways here at UP, not too far from being an undergraduate,” said Gallagher. “So maybe a little more in tune with some of the stressors or things that might be on the minds of students today.”

The role of a pastoral resident is to be a spiritual presence in the dormitory. There are no rules limiting this position to men or to those associated with a Congregation. For female dormitories like Fields Hall, having a woman in the role of pastoral resident is a big step towards diversity on campus and in the Catholic Church.

Besides being a woman, Hernandez Michalski is also passionate about her Latinx heritage. While at UP, she submitted an opinion piece to The Beacon following the controversial “Wally Awards” in 2018. As a woman of color, Hernandez Michalski represents more than just female leadership at UP.

Despite a student body that is 60% of women, only 18% of President’s leadership cabinet are women. While women still fight for a role in the Catholic Church, other Christian denominations have made strides in diversifying ministry leaders.

Brandy Daniels, an ordained minister of Disciples of Christ, is an assistant professor of theology on campus and studies the intersection of feminist and queer theories in religious spaces.

“There aren’t a lot of women in religious leadership at this school,” Daniels said. “I think creating these spaces will help change the conversations and open spaces to address different issues that minorities face in different ways.”

“The goal is to make everyone feel included because the Catholic Church literally means the Universal Church,” Hernandez Michalski said. “And so having diverse representatives in this faith will, ideally, end up inviting more people to join us.”

As a pastoral resident, Hernandez Michalski hopes to serve the women of Fields Hall by creating a strong faith-centered community – with the Sisters of St. Joseph of Carondelet as her inspiration.

Chiara Profenna is a reporter for The Beacon. She can be contacted at [email protected]